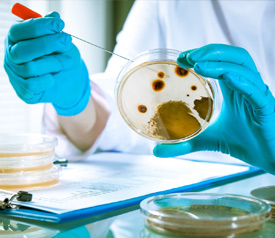 If you are a nurse, surgical resident, or really anyone who works in the fast-paced hospital environment, you need quick, convenient access to medical tape. Whether you are securing a tube in the NICU or doing a quick wound check and bandage replacement on pre-rounds, looking around for a piece of tape is not time effective. So, as most medical providers in hospitals do, they carry around a roll of tape with them at all times. A roll of medical tape is as ubiquitous as a stethoscope or trauma shears or a penlight.

The problem: Tape is a reservoir of microorganisms—even worse, a fomite. Tape is vehicle for cross contamination. When it is carried from room to room, left in high traffic areas, or passed from eager med student to an attending, tape can become a vector for transmitting pathogens.

One of the more interesting studies to demonstrate this was published by Redelmeier and Livesley almost two decades ago.1 They gathered a bunch of rolls of tape from various places around their hospital. They “borrowed” rolls from IV equipment baskets, from desktops on wards, or simply by asking someone to lend them a roll of tape. (Incidentally, they faced minimal resistance. If questioned they just said, “We’re testing the tape for stickiness.”). Redelmeier and Livesley then tested samples from the rolls of tape using standard culture conditions. A full 74% of rolls, it turned out, were colonized by pathogenic bacteria. (Same thing is true for fungus/molds2)

Based on this and many other studies, the CDC published guidelines stating that rolls of adhesive tape should not be shared between patients. Instead, they suggest, use single-use rolls of tape.3

Certainly, this approach has been used with some success with disposable stethoscopes. Disposable stethoscopes are relatively large, usually brightly colored, and left hanging prominently in the patient’s room. However, a stethoscope and a roll of tape are fundamentally different. A stethoscope is instantly recognized as durable equipment (in fact, cleaning crews are sometimes reluctant to throw away disposable stethoscopes when the room is turned over). A roll of tape, on the other hand, blends into the scenery. It is thrown away on food trays, placed in a drawer and forgotten, or taken by visitors as “free tape.” While contemplating a “one patient, one roll of tape policy” makes scientific sense, it does not make practical sense.

Perhaps, the gold standard in preventing tape associated bacterial transmission would be to use sterile tape. At least prior to opening the roll of tape initially, the roll is free of microorganisms (assuming the sterile package retains sterility over time). Unfortunately, once the roll of tape is opened and used a single time, sterility is broken. Oftentimes, remainder of the unused roll is discarded and wasted. The sterile tape may not be practically possible either because of the additional cost and therefore, sterile tape is not a practical solution, either, since it adds additional cost to the initial roll of tape, and is only useful for the first application.

Moreover, sterile tape may be a needless luxury when it comes to preventing infection. While sterile surgical adhesive tape is standard in operating theaters, researchers showed that prepackaged, on sterilized tape could be used for similar purposes. Bundy placed 120 un-sterilized tape rolls in a plastic surgical cabinet for two weeks. The researcher then took 480 samples from the 120 rolls and determined that the samples were effectively sterile of aerobes, anaerobes, yeast, and fungi, i.e., these organisms could not be cultured from the tape, even under ideal circumstances.4 Bundy also estimated that sterile tape is 5600% more expensive than nonsterile tape, and further suggested that unsterilized tape would be safe for wound closure in the field, emergency world, or resource poor settings.

Indeed, if unsterilized tape is potentially suitable for wound closure (though perhaps not in the surgical theater in resource- rich environments), it is certainly suitable for most routine hospital applications such as securing catheters, cannulae, bandages, and tubes.

Unfortunately, reused medical adhesive tape, whether initially sterilized or not, still poses a potential problem if it is transported between hospital locations or used on multiple patients. Researchers found that by nearly 3/4 of tape specimens collected from the hospital were colonized by pathogenic bacteria. However, if they peeled the entire first layer of tape from the roll, only 5% of specimens retain significant growth. While this certainly does reduce the bio burden on tape rolls, it is not exactly perfect. Importantly, bacterial colonization after removing two layers of tape was not tested.

Another problem with “one patient, one roll” directives is a substantial amount of tape waste. According to estimates, approximately 85% to 90% of a 10-yard roll of tape remains unused after patient discharge. Extrapolated out across the entire year, that equals 73 miles of wasted tape. One solution to this important issue is single-use tape rolls. Since the average patient only requires about a yard of tape her hospital stay, it is much more cost effective to use a single-use roll at the start of the patient’s stay. Hy-Tape, for example, is a highly versatile, durable, and flexible medical tape that comes in 1.5-yard, single-use rolls. As one would imagine, the cost of a single use roll is considerably less than a standard-sized roll. Thus, a single roll of tape can supply to the room at the beginning of the patient’s stay, used on that patient and only on that patient, and any negligible amount of tape that remains at discharge can be discarded with minimal concern about waste.

Perhaps the most elegant solution to this entire problem is the use of pre-cut, single-use tape strips. Each four strip pack of tape is individually wrapped, and thus the tape inside is protected from colonization from airborne or contact pathogens. The busy medical professional can replace the roll of tape in her pocket with a handful of single use tape strips. The tape is precut, so the provider does not need to use another potential fomite scissors to cut the tape to the needed length. This provides an on-demand source of medical adhesive tape, without becoming a vector for hospital pathogens.

Hy-Tape makes a pre-cut, single use tape strip that is ideal for this purpose. The tape is latex-free and waterproof making it useful for a variety of clinical situations. Additionally, the tape base is made of zinc oxide base. Zinc oxide has been shown in several studies to inhibit the growth of various pathogenic microorganisms including E. coli, Klebsiella, and Pseudomonas among others.5,6,7