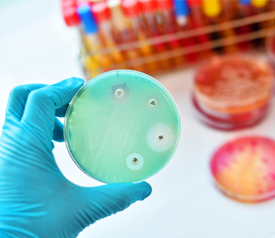 MRSA (pronounced MURR-sah) is an acronym that stands for methicillin-resistant Staphylococcus aureus. Simply put, MRSA is a staph infection that is resistant to certain types of antibiotics. MRSA is not just antibiotic-resistant bug; it causes a particularly aggressive form of staph infection. When MRSa affects the skin, it can cause cellulitis and abscesses, which are pockets of infection under the skin.1

Doctors and scientists once believed MRSA only affected people in hospitals, but now we know MRSA affects people in many other institutions and settings (i.e. community-acquired MRSA). Today, community-acquired MRSA is as virulent and aggressive as hospital-acquired MRSA, if not more so. Because the bacterium is resistant to certain types of antibiotics, treating MRSA can be difficult. Making matters worse, unless MRSA is fully eradicated, it can return and re-infect.

What are the risk factors for MRSA?

MRSA is still a hospital-borne infection, so a recent hospitalization, surgery or hemodialysis places patients at increased risk for MRSA colonization. People who are colonized with MRSA bacteria are at much greater risk of developing a MRSA infection. MRSA tends to spread in areas where large groups of people come together. As such, MRSA outbreaks tend to occur among incarcerated individuals, those living in long-term care facilities, players on team sports, and among military personnel. People who have had an MRSA infection in the past are at perhaps the greatest risk of developing a MRSA infection.  Indeed, researchers found over half of people who were infected with MRSA had a second infection within six months.2

What is the difference between infection and colonization?

The major difference between infection and colonization is whether MRSA causes obvious symptoms. A MRSA infection of the skin is rather obvious; it causes an open wound with redness, warmth, and, swelling. There is usually some break in the skin, and the area is usually sore or painful.

MRSA colonization is just the opposite. People who are colonized with MRSA simply carry the bacteria on their skin and have no symptoms at all. Common places for MRSA to colonize are the nostrils, the armpits, the rectal region, and around chronic wounds.3 Importantly, these wounds are not caused by MRSA; MRSA tends to live near the wounds without immediately causing a MRSA infection.

How do I prevent MRSA?

People pass MRSA amongst one another through contact. This contact can be direct or indirect. An example of direct contact is a person, colonized or infected with MRSA, who touches another person and transfers bacteria directly. An example of indirect contact is a person who may touch something that carries MRSA, such as an unclean towel in a locker room or stethoscope in a hospital.

Because MRSA is transmitted through contact, one of the best ways to prevent transmission is through meticulous hygiene. While MRSA is resistant to antibiotics, it cannot withstand the killing power of alcohol-based hand sanitizer. People can reduce their risk by frequently cleansing their hands with hand sanitizer. Indeed, since hospital-acquired MRSA is most commonly transmitted to patients by the contaminated hands of their healthcare providers, patients should insist that their caregivers cleanse their hands before any patient contact.

In institutions, common use items should be treated as if they were potentially infectious. Workers should use gloves while handling reusable towels and clothing, and launder those items in hot water. People who have MRSA infection, have had a recent MRSA infection, or who may be colonized with MRSA should strongly consider using disposable items, when possible. This not only decreases the risk of infecting others, but it also decreases the risk of prolonging the infection or having the infection return. Patients can stop MRSA colonization by using triple antibacterial ointments in areas known to harbor MRSA (e.g. nostrils).

For MRSA, the choice of tape is important

As mentioned earlier, MRSA resides in and around chronic wounds. This is not necessarily because of the wound, but because of the items used to care for that wound. MRSA is found on catheters that enter the skin, the bandages used to cover wounds, and the tape used to cover those bandages. Allowing MRSA to stay on these items increases the risk of infection to the patient, to the patient’s caregivers, and to other people who may come in contact with those caregivers.

Hy-Tape is perhaps the ideal choice for chronic wound care, especially for those who are at risk for MRSA. This includes currently or recently hospitalized individuals, those who live in long term care facilities, or anyone who frequently requires medical care or wound care.

Commonly known as the “Pink Tape,” Hy-Tape is waterproof and washable, which means it can withstand the wear and tear of daily use. It holds strong, but releases easily and without harming the skin, so it is ideal for patients who need frequent dressing changes. Another advantage of Hy-Tape is its zinc oxide-based adhesive. Zinc oxide is selectively toxic to Staphylococcus aureus4, which means zinc oxide can kill MRSA and keep the bacteria from growing.5

One patient, one roll of tape

As we now know, MRSA moves from objects to people through contact. Rolls of tape are notorious for carrying potentially harmful bacteria. For instance, researchers found that three out of four rolls of hospital tape are covered with pathogenic bacteria.6 Frighteningly, the researchers collected tape from people who were carrying the tape around the hospital in their pockets, and using these rolls of tape on multiple patients.

To help protect patients and healthcare providers from MRSA carried on tape, caregivers should never carry a single roll of tape from room to room. Furthermore, they should never use a single roll of tape to care for more than one patient. Instead, one patient should have one, dedicated roll of Hy-Tape at any given time. Hy-Tape makes this easy and economical, since rolls come in various sizes, even down to single use rolls. In fact, single use rolls of Hy-Tape allow you to leave a single roll with each patient without worrying about wasting tape or raising healthcare costs.

If you would like a free sample of Hy-Tape, simply let us know. We take MRSA infection very seriously, and we want to do our part to help prevent it.