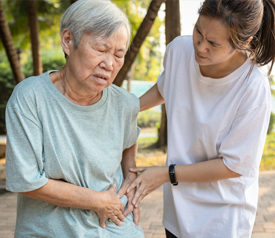 Diverticulitis is a painful condition in which a small part of the intestine becomes inflamed. Diverticulitis symptoms vary from person to person, and each flare up may be different. People with diverticulitis almost always have belly pain. The pain is often in the lower left side of the abdomen, but it can occur anywhere in the belly.

In moderate to severe cases of diverticulitis, people may become nauseated and vomit. These diverticulitis symptoms usually occur when the intestine becomes obstructed or does not function properly (i.e. ileus).

In rare cases of diverticulitis, the intestine may perforate or rupture, which can be life-threatening. In these cases, people may have fever, widespread inflammation (e.g. peritonitis), very low blood pressure (i.e. shock), and other dangerous symptoms.

The difference between diverticulitis and diverticulosis

It is unclear what exactly causes diverticulitis, but we do know of several risk factors that make getting diverticulitis more likely. A diet that is low in fiber and high in fat and red meat contributes to diverticulitis. Likewise, being overweight or obese puts people at greater risk. Smokers are at risk of having more severe complications from diverticulitis. People on chemotherapy or those with HIV infection, Ehler-Danlos syndrome, or Marfan’s syndrome are more likely to have acute diverticulitis.

Interestingly, eating nuts, seeds, corn, or popcorn does not increase the risk of developing acute diverticulitis or even diverticulosis. People have long believed that there is an association, but recent research shows there is no link.

How do I avoid diverticulitis?

The best way to avoid diverticulitis is to make dietary changes that reduce your personal risk. Almost all of us can stand to eat more fiber. Whole fruits (not juices) and vegetables are great sources of dietary fiber. You can determine the amount of fiber in a package food by ready the label—dietary fiber is listed under total carbohydrate. Note: while dietary fiber may be considered a carbohydrate, your body doesn’t digest dietary fiber in the same way as carbs like sugar or bread.

Complicated diverticulitis, which includes signs and symptoms like a very high fever, severe belly pain, advanced age (>70), or other complicating issue, is treated in the hospital. Patients can receive IV antibiotics, IV fluids, pain medication, and a special diet (i.e. bowel rest or clear liquids). The other important reason to hospitalize someone with complicated diverticulitis is if they need surgery.

A portion of people with severe, complicated diverticulitis will need surgery to treat their condition. The surgery usually involves removing the part of the intestine that is inflamed, blocked, or perforated (i.e. has a hole in it). What happens next is a complicated matter, but the decision is usually made by the surgeons during the procedure itself. Either the two remaining, healthy ends of the intestine are stitched together OR one healthy end of the intestine is routed to the side of the belly through an opening the surgeon creates called a stoma. If the intestine is diverted to a stoma, this is called an ostomy (e.g. colostomy, ileostomy). The patient wears an ostomy bag to collect waste coming from the stoma (i.e. opening in the belly).

Adapting to an ostomy

In some cases, the diverticulitis surgery happens very quickly—even emergently—giving patients little or no time to prepare. Thus, many people wake from diverticulitis surgery to find themselves with a stoma and an ostomy. While most people find this unsettling and disturbing, many of the initial concerns or fears that patients have about ostomies are not true. Ostomies are very discrete—if managed properly, no one will know you have one. Unless there is a leak, which is rare, ostomies do not smell.

People can still participate in various types of activities and exercise if the stoma and bag are properly secured. In fact, people with ostomies have completed marathons! Indeed, life with an ostomy requires a little adjustment, but it doesn’t have to be life-changing.

Caring for yourself after diverticulitis surgery

The most important part of ostomy care is to maintain a clean, dry, tight seal between the flange of the device and your skin. This takes a little planning and prep work, but once your stoma nurse shows you how, it is quite simple. Many people carry a small ostomy supply bad with them that extra pouches, cleansing wipes, sterile gauze, and high-quality medical tape.

The medical tape you choose for ostomy care after diverticulitis surgery is important. Hy-Tape is the ideal medical tape for ostomy care. Hy-Tape’s zinc-oxide based adhesive is gentle on the sensitive areas around the stoma. While it is gentle, Hy-Tape also holds the ostomy device firmly in place, allowing you to enjoy even vigorous exercise (remember to check with your doctor to see if you are healthy enough for vigorous exercise, first). Hy-Tape holds tight even when cleaned with soap and water, a must have for any medical tape used around the stoma site. Then when you need to perform stoma care, Hy-Tape gently releases without tearing the skin.

Some things to consider