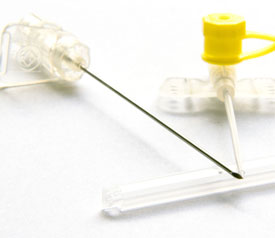 A peripherally inserted central catheter (PICC line) is a long, thin tube that is inserted into a vein in the right upper arm and extends to the superior vena cava, just outside the heart. PICC lines usually have two ports through which fluids, medications, and blood products can be infused. PICC lines allow patients to continue IV therapy at home—something that cannot be safely accomplished with standard IV catheters or traditional central lines. While PICC lines are generally safe for home use, proper PICC line securement and use are essential.

Why are PICC lines used in medicine?

Healthcare professionals overcome this problem by using PICC lines, which are long catheters that extend from the arm vein to a large blood vessel near the heart. PICC lines are useful because even irritating medications infused through these lines do not irritate large diameter veins near the heart. PICC lines are safer for home use than traditional central lines because they enter the body through small peripheral veins rather than large central veins. PICC lines are also much more secure and stable than short IV catheters, and can standup to weeks of repeated use.

PICC lines are used to infuse certain IV medications and blood products. PICC lines are commonly used to administer cancer chemotherapy, which needs to be infused over weeks or months and can be irritating to veins. PICC lines can also be used to administer long courses of certain IV antibiotics, such as vancomycin. Another common reason to use a PICC line is to administer total parental nutrition or TPN. Total parental nutrition is a mixture of carbohydrates, proteins, fats, vitamins, and minerals that are administered intravenously. TPN can provide nutrition for people who cannot eat food by mouth.

Someone may have a PICC line placed if they need ongoing IV therapy but have no other reason to stay in the hospital. A PICC line is usually placed if the patient needs IV therapy for more than a few days, up to 6 months.1

PICC lines are excellent choices for intermediate-term venous access, but the proper use of PICC lines is essential to keep them from failing. PICC lines can fail (and usually must be removed) for several reasons.2

As you can see, proper PICC line securement can help reduce the risk of several types of PICC line failure including secondary catheter migration, occlusion through malposition, and phlebitis. PICC lines are not “tunneled,” so securement and stabilization depend on how well the healthcare professional can anchor the end of the line to the arm. In truth, medical tape must do all of the work of stabilizing the end of the PICC line.

Hy-Tape—The Original Pink Tape®—is strong enough to provide excellent secondary securement for PICC lines. It conforms to the shape of skin surfaces and adheres even more tightly as it warms to body temperature. Despite its strength, Hy-Tape releases cleanly and with little to no skin trauma. This, it can be easily removed from lines and skin. This is important, because any medical tape used for PICC line securement must be strong on lines, but gentle on skin.

Hy-Tape may be useful for primary PICC line securement

Because Hy-Tape is latex free and has a soothing, zinc-oxide based adhesive, it can be used as primary PICC line securement for patients with a documented or suspected latex allergy or otherwise sensitive skin. Healthcare professionals can use Hy-Tape under and over the exposed PICC line to stabilize it on the skin while still allowing free access to the PICC line ports. As discussed previously, Hy-Tape can also be used for secondary PICC line securement.